Xioami Redmi Note 6 pro is one of the awaiting Smartphone which will launch on 12 November 2018 in India this smartphone has 6.26 inches display with it has pixel density 403 PPI, this phone has the screen to body mass ratio 81.1%.

While this device has screen resolution 1080×2080 pixels it has 19:9 aspect ratio this phone has a multitouch display up to 16m depth in colours. The Device has IPS LCD capacitive touchscreen With a corning gorilla glass Protection.

The Device is Powered by the octa-core 1.8 GHz kryo 260 Qualcomm Snapdragon 636 (14nm) coupled with 64 GB storage and 3GB of RAM on the board which is ahead up to 256 GB microSD card and this device has running Android 8.1( oreo) this smartphone has provided Adreno 509 graphics card this phone has a 3.5 mm jack.

Xioami Redmi note 6 pro has the rear camera 12MP and 5MP with dual led flash and this rear camera have aperture f/1.9 and f/2.0 with it has front camera 20mp and 2mp with this selfie shooter has aperture f/2.0 while front and rear camera both has video recording 1080 at 30 fps. 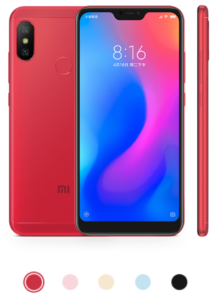 it devises panorama which is use camera left to right side within around while this phone has HDR which is use camera then click the hdr then 3 images capture it and it has the massive battery li- pol non-removal 4000mAh battery then support which is charged by USB type-c 2.0 and this battery has 92h fortitude rating.

it has fingerprint Sensor on the rear panel of the Device and some sensors have this phone like accelerometer, gyro, proximity, compass and this phone have receivable, colours black, blue, rose gold, red and this phone has a starting price about  ~$226.

Let us Know What did you think about Device? Let us Know in Comment. Stay tuned for More Updates.