Vivo is the upcoming budget Y series smartphone for Indian market Vivo Y91, the Vivo  Y91 smartphone has already been announced in some of the countries but it is expected to launch here by 20th January.

Processor.
Under the Hood, it is the latest octa-core MediaTek Helio P22 SoC coupled with 3GB of Ram and there is the ADRENO PowerVR GE8320 GPU amazing graphics card.it packed the 64GB of internal storage, but storage can be further expandable up to 256GB Via the MicroSD card slot. the device runs Android 8.1 Oreo operating system out-of-the-box based FunTouch OS Skin on top of Android.

For the Camera, the smartphone gets the 13-megapixel + 2-megapixel sensors dual rear camera setup with LED flash, it has offers the dual aperture f/2.2 and f/2.4 respectively on the rear. for the rear some features to click the good images like as portrait mode, slow-mo, and AI features while the front camera has the 8-megapixel camera with the f/1.8 aperture lens.

Battery and other Connectivity.
There has the capacity of massive 4,030mAh battery with the support the high-level power management features. for the connectivity, it supports the dual SIM Slot include 4G network and Wi-Fi 802.11 b/g/n, Bluetooth v5.0, GLONASS, GPS, and a micro-USB 2.0 port. 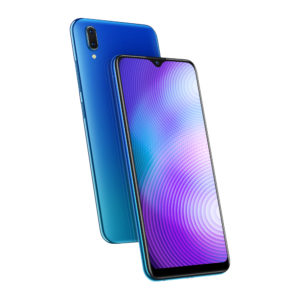 Sensors and Headphone Jack.
For the security, the smartphone has the rear-mounted fingerprint sensor and the unlock sensor which directly open. Vivo Y91 has the 3.5mm Headphone jack with the clear sound.

Price, Colours and available store.
Vivo Y91 smartphone is set the price for India of Rs 10,990 convert roughly ~$194  within two colors as, like Starry Black, Ocean Black with the gradient texture .the handset comes bundled with a free Bluetooth earphone worth ~$ 16. the smartphone has the available for the purchase Vivo’s official E-store.