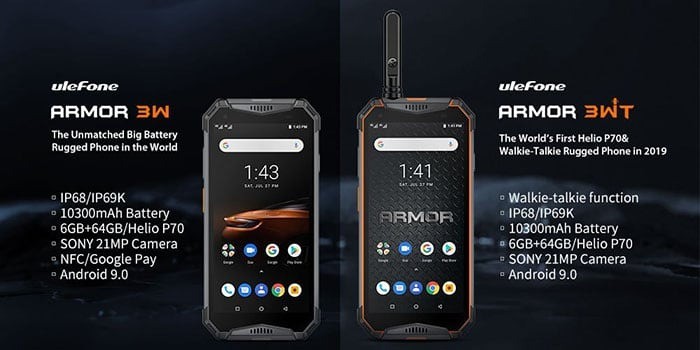 Ulefone Launched it’s Flagship Device Armor 3W and 3WT, Which is a Rugged Smartphone. These are ARMOR Edition Device Offers you a First Helio P70, External Walkie-Talkie alongside Massive Battey Rugged Smartphone in the World. 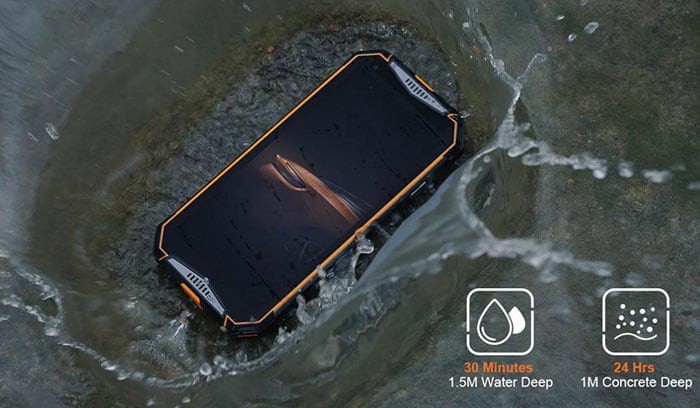 It Comes With a 5.7-inch Full HD+ Screen Display. Under the Hood, The Device is Powered by the MediaTek Helio P70 Soc Coupled With 6GB of Ram and 64GB of Onboard Storage. On the software Front, It Run on Android 9.0 pie Out of the Box. in the Terms of Camera, It housing a Single Rear 21MP Camera and 8MP Selfie Shooter.

There is also a Rear Mounted Fingerprint Sensor on the Side to for Authentication. It Also Works During the Confirmation using NFC Payment Google Pay.

Ulefone Armor 3W and 3WT rugged phone with large 10,300mAh battery and charging starts price and where to buy pre-order.

Both the Smartphone is Tested under Water Test and MediaTek Helio P70 With 6GB Ram Scored 136051 Points in AnTuTu. However, In AI Test it Scored 2810 Points. Not to mention, This Device is Not designed to Play games Instead it Used to Work in Certain Condition.

The Device Packed a MIL-STD-810G, Which Having an IP68/IP69K Water and Dust Resistance. Moreover, You Don’t have to worry about the Device Because It Can Survive Two Hours of Depth of Two meters Can Easily Stay up to 24 Hours.

The Ulefone Armor 3W and 3WT Packed a Massive 10300mAh battery, Which Can Stay Up to 4 Days With Moderate Use. Even Having an 18W Fast Charger Bundled in the Box.

On the Othe Hand, The Armor 3WT having an External antenna Operate With the Frequency of 400-470 MHz radio mode. Therefore, you can Easily Communicate at the Distance of up to 10 Km in open Terrain.

Thanks for Being With us, Share your Opinion and Feedback in the Comment Section down below. Stay tuned for More further updates in future