a compact smartphone that unfolds to reveal a large, immersive display for multitasking and viewing content.

Finally After a Long Year Samsung Unvield Smartphone Technology WIth a Flexible Display. The Device was basically a Tablet Until You Folded it and Put into your pocket, Samsung planned for the mass production of Display Months. 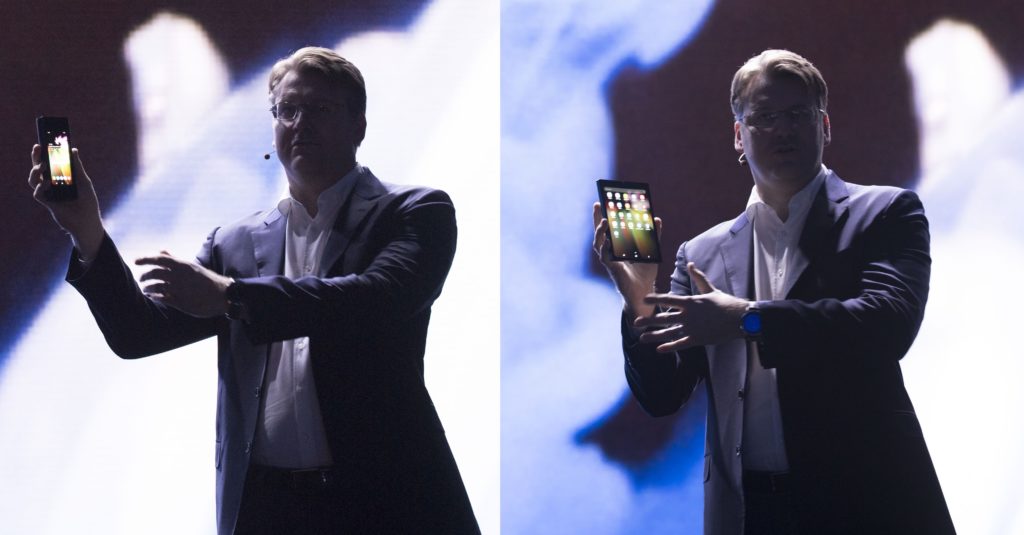 Google is also announced that it Will Support for all new Foldable Smartphone Category at Android Developer Summit, Also Microsoft is also Working on Multiscreen Devices.

Samsung is not only manufacturing to working on Foldable Devices, While Many of Manufacture also Joining the Foldable Display in early 2019. Reportedly, Huawei, Lenovo and xiaomi already teased their Prototypes alongside With LG Flexible OLED Display and TVs.

The Device has a 4.58-inch OLED Display and 7.3-inch Screen OLED Display Size With the Resolution of 840 x 1960 and 1536 x 2152 respectively. Samsung Shows its Infinity Flex Display in Samsung Developer Conference at San Francisco. The display comes With a Standard Piel Density of 420 ppi, With the Aspect ratio of 21:9 and 4.2:3.

The Display was not Comes With a Greatest Display Considering a Gaming Experience and Video Viewing.
The app will run over app Flipboard Which modifies it is Depending on Which Mode running on Infinity Flex Display. While Samsung has its Own Multi active Windows to run three apps at once depending in Infinity Flex Display.

Samsung also Re-designed the flexible Batteries to replace an Ordinary Batteries With a Capacities of 3,000mAh to 6,000mAh later this Year. Also, the Device is Supposed to powered by the Qualcomm Snapdragon 855 Soc.

Till Samsung Didn’t Say anything about the Cost and also the name, a Release date is also a Mystery Until the Deice is Officially Launched.

Let us Know Did you excited about this Smartphone in Comment Section Below.