SAMSUNG GALAXY A11 COMES WITH PUNCH-DISPLAY AND QUAD CAMERAS 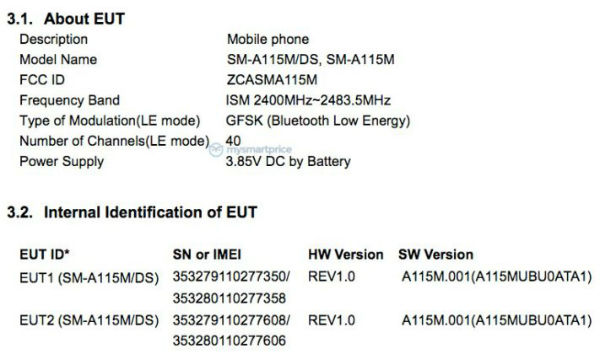 Samsung slightly launched its new Samsung Galaxy A11. This device has comes with lots of new features and latest technology. Recently, This device has Certified on FCC and also certified by Wi-Fi alliance. Where the device spotted running on Android 10 Operating systems, Also it received the FCC certification unveiled some of the key specification and design language of the device

As per the Latest Leaks, 91Mobiles Reveals Samsung Galaxy A11 comes with the Punch-Hole Display with Full HD+ resolution. This device housing with the Quad Rear Camera Setup on the Rear panel. Samsung Galaxy A11 has packed with the Massive battery could be b/w 5,000mAh to 6,000mAh battery.

This device will come with a rear-mounted fingerprint scanner similar to traditional design. Whereas, to power, the device is equipped with a massive battery but there is no fast charging support. Likely, the device support Dual SIM and the SIM appeared on the left side of the device frame. Furthermore, the chipset is paired with 128GB of onboard storage. While the device must have an expandable storage solution via MicroSD Card.

Sensors on the device include an accelerometer, a gyro sensor, a geomagnetic sensor, a hall sensor, proximity sensor, and an RGB light sensor. For Security purposes, Samsung uses might In-display Fingerprint sensor and a Face Lock. So, Connectivity options in the smartphone include 4G VoLTE, Wi-Fi 802.11 a/b/g/n/ac, and Bluetooth 5.0.

Samsung Galaxy M31 has come with lots of new features and latest Technology. As per Report @geekyranjit Share an Images Shows comes with 64MP Camera Setup. According to the latest Leak, 91mobiles Revealed its Some specification like comes with 64MP L-shaped Quad Camera on the Rear Panel and 6,000mAh battery. Samsung Galaxy M31 has powered by Samsung’ Exynos 9611 Soc. This Chipset Coupled with up to 6GB RAM and 128Gb Storage On-board.