Problems on Realme 3 Pro : You Should Know Before Buying it -Review

Hey, Tech Greeks We Back With a New Details Analysis to Find Out the Problems on Realme 3 Pro. Software a Long Time of Releasing Redmi Note 7 Pro, Realme unveiled its Realme 3 Pro as a Direct Competitor of Redmi Note 7 Pro. Let us Talk about More and Cover an In-Depth Quick Review.

Lets First Talk about the Heart of the Smartphone, The Device is Powered by Qualcomm 10nm Snapdragon 710 Soc Coupled With 4GB and 6GB of Ram along 64GB and 128GB of Onboard Storage Option. Chipset is Much Power Efficiency and Perfect Smartphone to Play Game for a Long Seasons.

To Boost the Device it Has kryo 360 GPU and Adreno 616 GPU. Considering all terms of Chipset Make the Device a Balance Smartphone. But the Read Speed of Realme 3 Pro has a Big Difference Compare to Redmi Note 7 Pro. This is the Something You don’t Notice all the Time.

Read Speed of Realme 3 Pro is 290MB/s as for Redmi Note 7 Pro is 450MB/s. Further, The oleophobic coating on the Devie is Not too Much But in Case if you Use the Screen Protector then it is not a Problem for you. 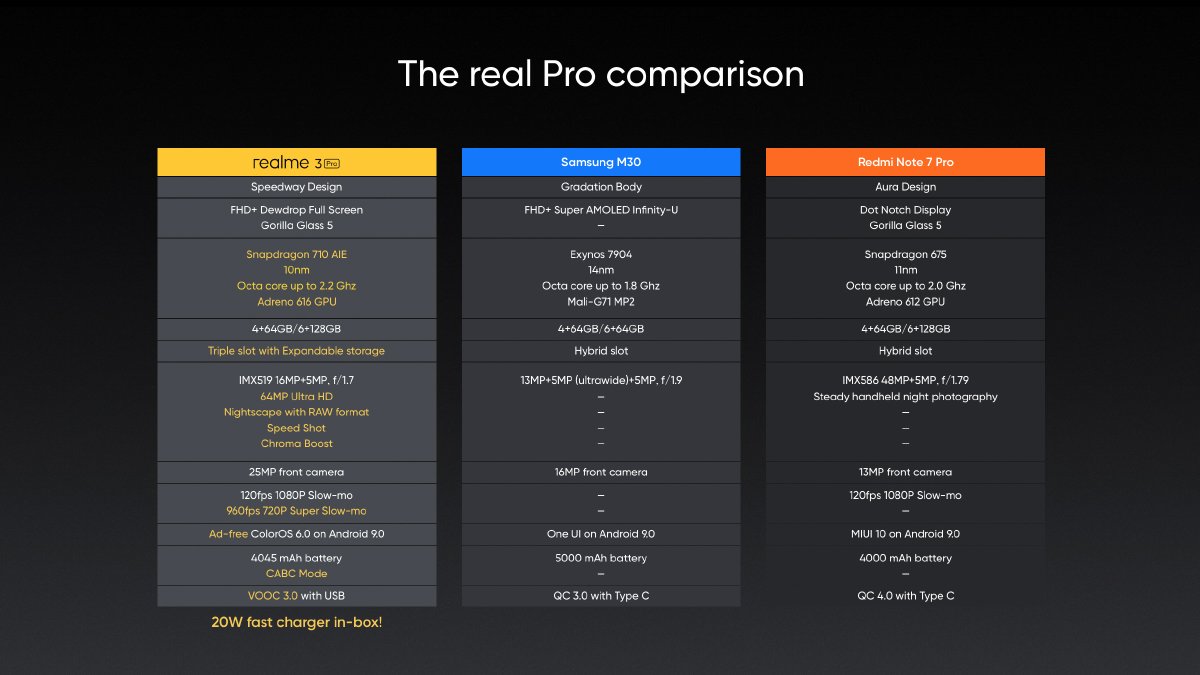 Therefore, The Device also has Super Slow Motion Which works at 960fps. The Selfie Shooter is a 25MP F/2.0 Which Gives Some Awesome Portet Selfies.

The Device is Very Much Familiar With Realme 2 Pro, Same 6.3-inch IPS LCD Display of 2340 x 1080 Pixel Resolution Protect With Gorilla Glass 5. Decent to Protect Your Screen from Major Scratched. But the Difference Shown as it Produces More White-Means a Better Color Producer as Compare to Realme 2 Pro. 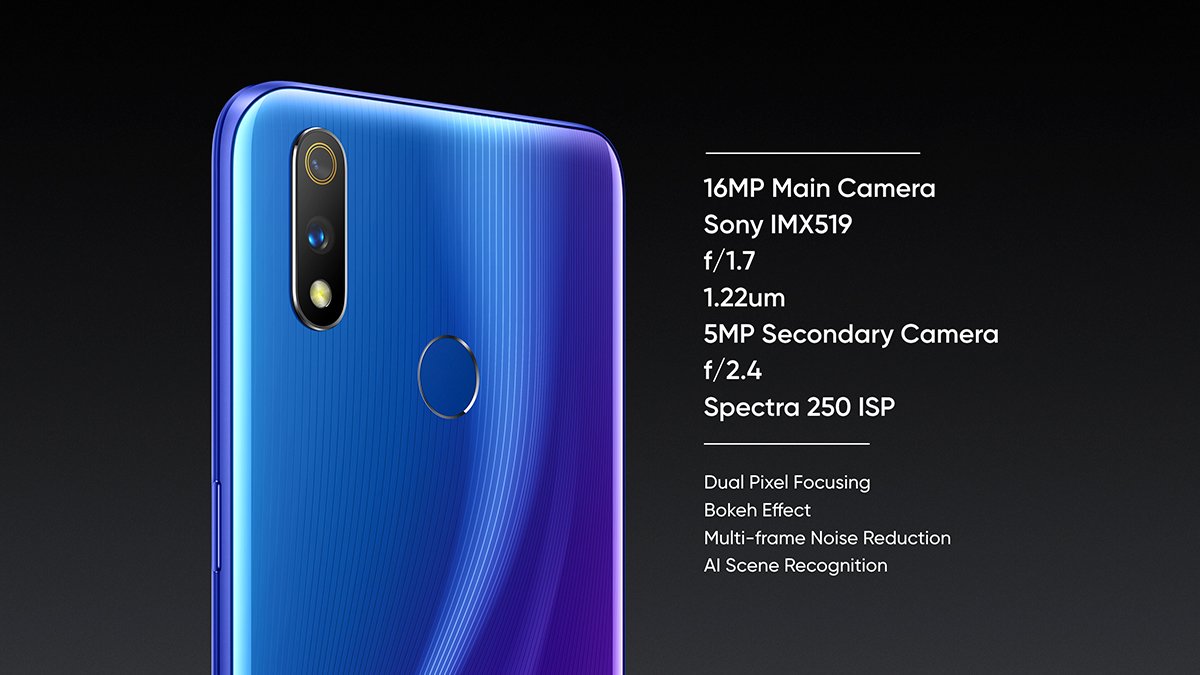 Anyway, the Back Panel of the Device Uses Polycarbonate Material, Which Looks Like a Glass Body. We Hope it is More Scratch Proof Becuase We all Know that the Realme 2 Pro Loves Starches a lot.

Apart From that, It Has to Rear Mounted Fingerprint Sensor Which is Fairly Fast. Additions It has dual Sim Slot and Dedicated Micro-SD Card along with 3.5mm Audio jack.

Usually, Users Didn’t Get any Issue During a Generally Use, The Experience using the Device is Smooth and Lag Free. The cherry on Top, You can play PUBG on High Graphics Setting. After the Device Also Support Fortnite as Well.

As for Android The device Run Over Android 9.0 Pie Based ColorOS 6. Which is one of the Great Custom Skin Consider it doesn’t Show ads. It Includes App drawer and Single Swipe up Universal Search. 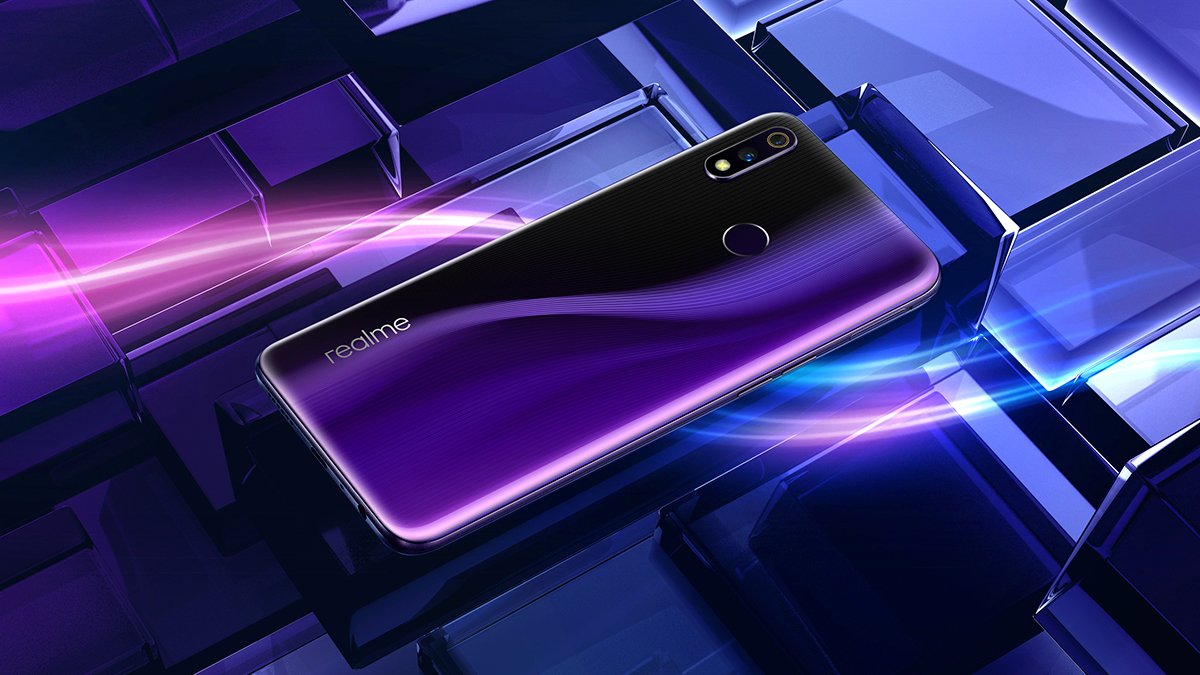 Similarly, Something Generally Not is all Android Skin like the Short Press Power Button to launch Google Assistant, Block Spam Messages and Secure Keyboard.

The Default Keyboard of the Smartphone is Pretty Good because it Doesn’t Share your Data With anyone. The Main Reason to like it’s Keyboard was ie. It doesn’t Connect With Internet Menas No Data Sharing Possible in any Case.

If you Require widevine L1 Support then Realme Full You by Supporting it. Only Thing I Dislike about the Color is App Icons Because of its un-informally Design Language. Some apps are Rounded and Some are Square.

Both the Smartphone is Amazing Smartphone Considering the Price Segment. Not to Forget it Packed a lot of Hardware Features at Affordable Price. In Specs Seet and Looking Toward BenchMark the Redmi Note 7 Pro Higher than Realme 3 Pro.

Other
The Hardware Needs but Software is Equally Important, Redmi Uses MIUI and Realme Uses ColorOS. No doubt MIUI is More Mature than Freshly ColorOS (Realme), But We can’t Forget about the Ads Recommendation in MIUI. In terms of Privacy ColorOS is Much Better. We also Can’t Forget than Redmi Note 7 Has USB Type-C QC 4.0 (10W)Charger and IR Blaster as Well.

Okay, Realme Support Vooc Charging (20W) and Having Dedicated Slot for 2 Sims along with MicroSD card But Not in Redmi Note 7 Pro.

In the End, It is Also Necessary to Know the Specification of the Device. Let’s Took a Toward the Reference Article. 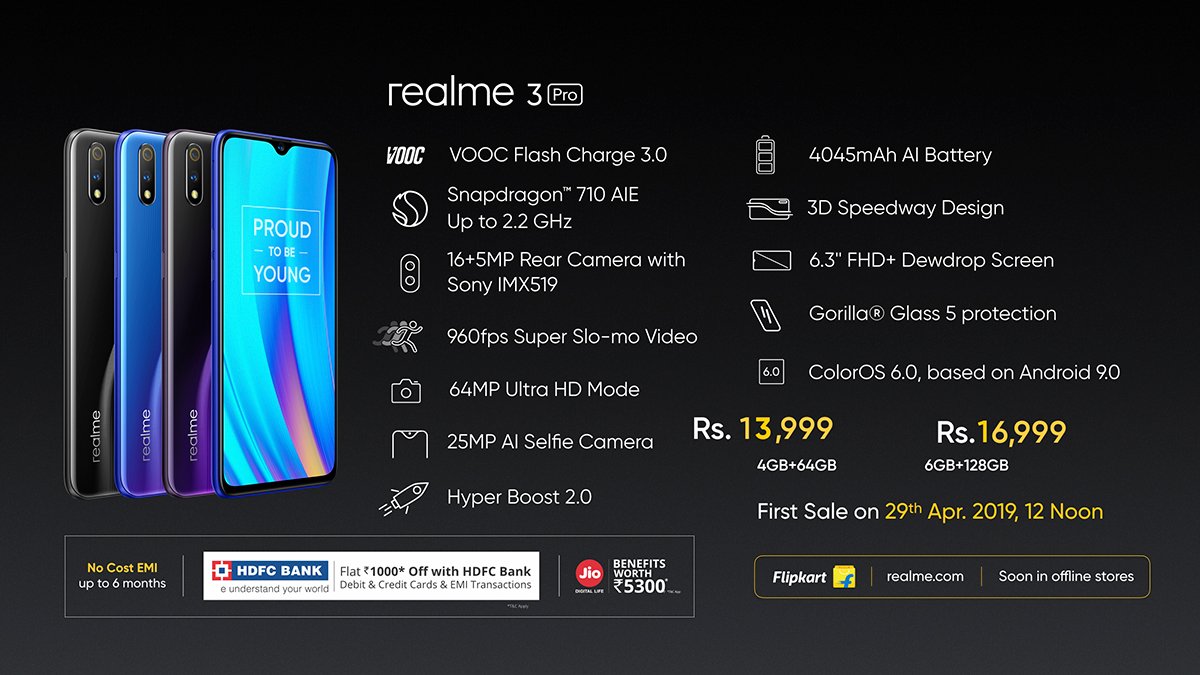 Realme 3 Pro has the latest Snapdragon 710 AIE chipset with hyper-boost 2.0. This chipset is manufactured on the flagship 10nm process with clock speed up to 2.2 GHz. I think Snapdragon 710 is better than snapdragon 675 Soc on the redmi note 7 Pro. This chipset coupled with two different 4GB and 6GB RAM and 64GB storage on their Board. It has run the latest colour 6.0 Based on Android v9.0 (Pie) out of the box. This device has an Andreno 616 GPU.

First Thing First, The Realme 3 Pro has a dual 16MP with an aperture f/1.7 primary camera and 2MP with an aperture f/2.4 the camera on the back with Sony IMX519 flagship sensor. This device has 4k support video and 1080P recording support with EIS. It shoots ultra HD photos and there is 64MP Ultra camera Mode. For Front, there is a 25MP selfie camera. There is also feature nightscape which is very good. It comes with beatification 2.0, HDR, portrait mode, also features face recognization. 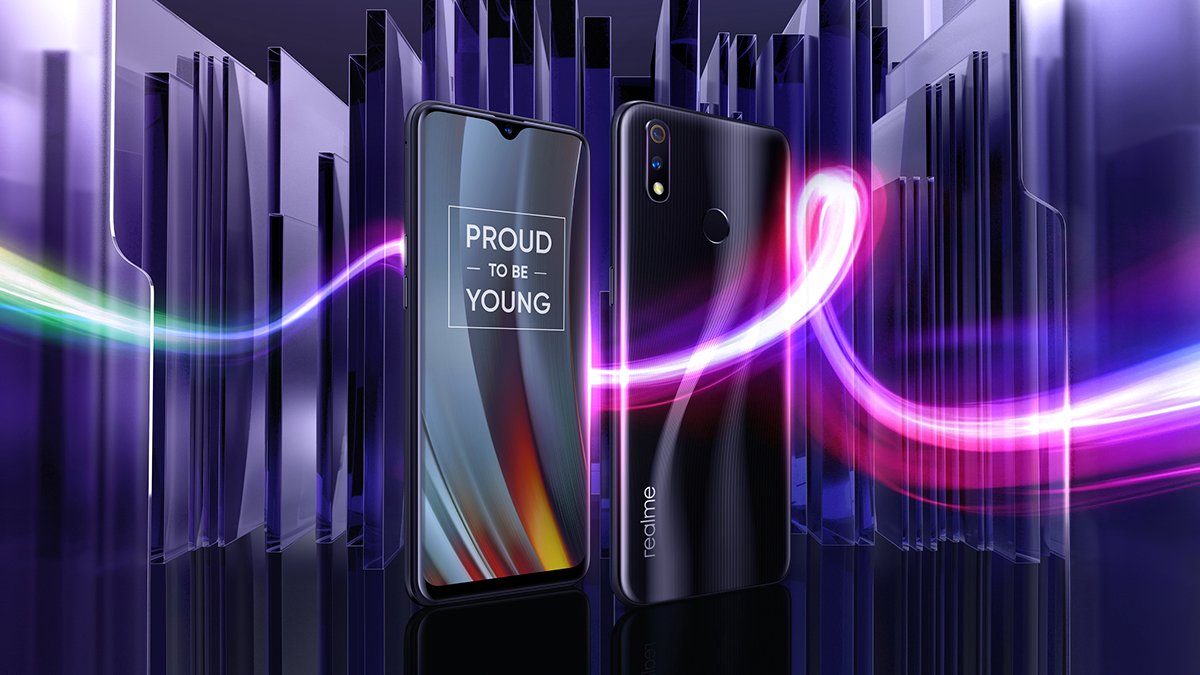 The realme 3 Pro has 6.3” full Hd IPS LCD display with a tiny water notch and for protection, there is Gorilla Glass v5.0. Their screen to body mass ratio is 90.8% and Aspect Ratio is 19:5:9. It has massive 4045 mAh non-removable battery with VOOC 3.0 20W fast charging, moreover 20W fast charger come in the box. 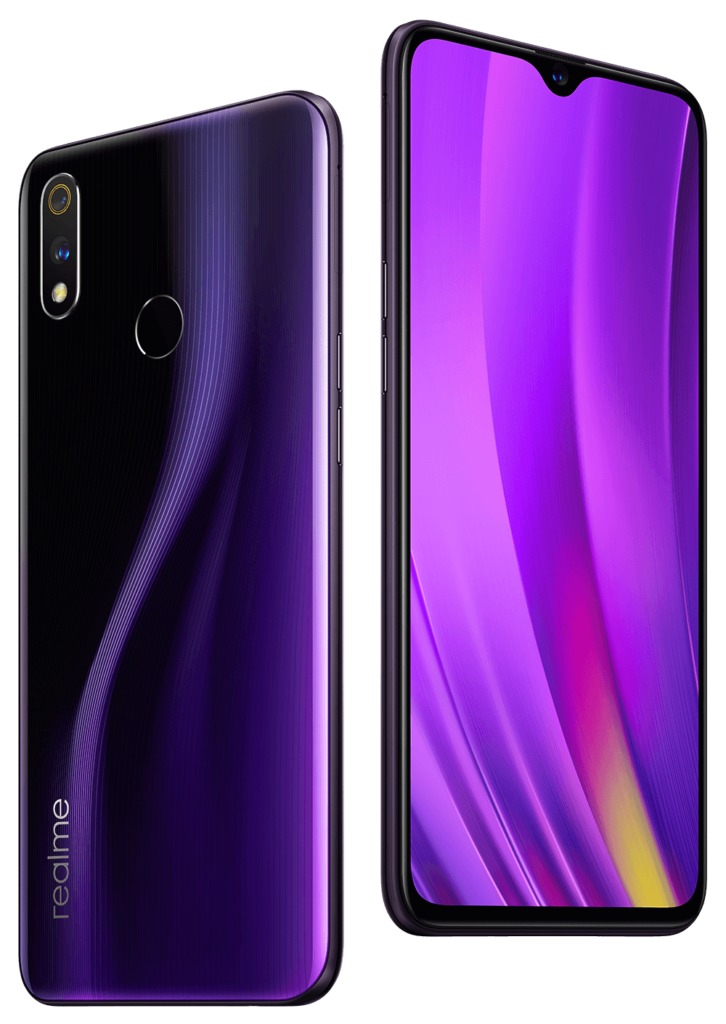 You charge this device very fast something half an hour. Which goods for the realme users. You can easily use the battery almost 7 Hour for PUBG and almost 2 days simple mode. It features to CABC technology to an increase 32% more battery life.

However, The Sensors on the device include an accelerometer, gyro sensor, a geomagnetic sensor, hall sensor, proximity sensor and RGB light sensor. This device has a rear-mounted In-display fingerprint scanner supports Bluetooth 5.0 connectivity, 3.5mm headphone jack. There is one speaker on the bottom provide 2 times sound. 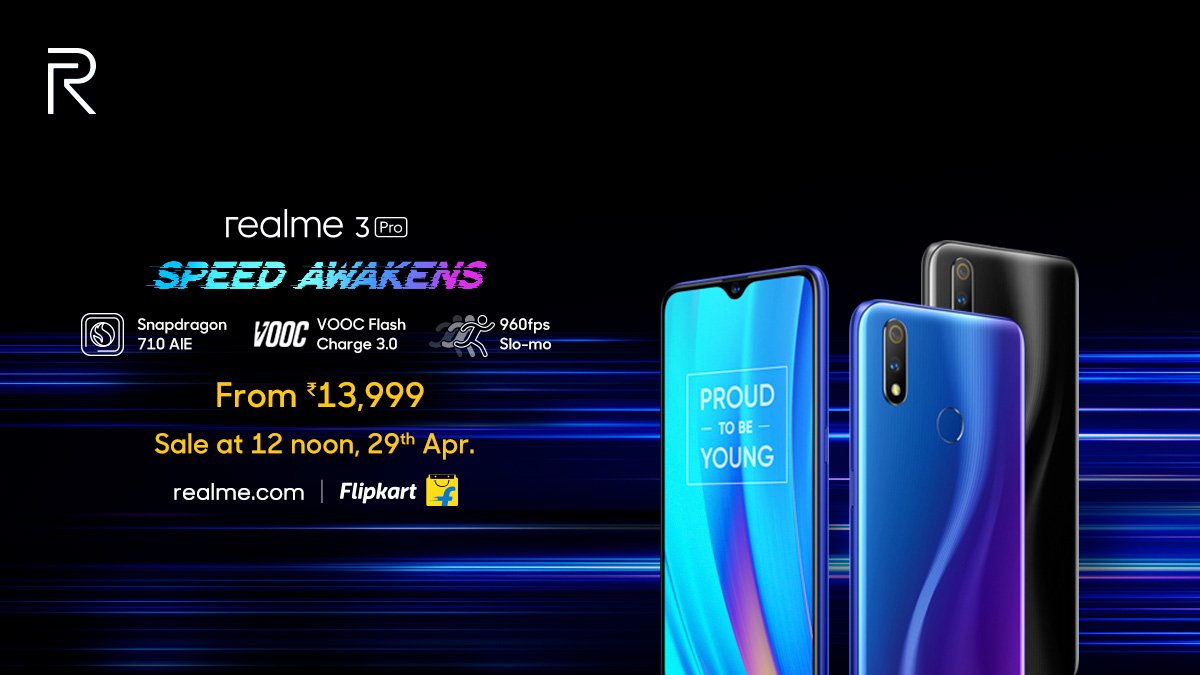 Therefore, This device price is 13,999 for 4GB+64GB variant and 16,999 for the 6GB+128GB variant. It comes with two different colours option Diamond Black and Diamond Blue.

Guys, We are Interesting to know your Opinion in the Comment Section Down Below. Stay tuned for More Further Updates on Same.

You Should go Realme Service Centre or Oppo Service Centre Near You. Also, You can Share With realme India Support page on Facebook for all your service.
Visit the page at: m.me/realmeindiasupport

I am using real me 3 pro … its a nice phone under this price and new updation released may it will improve camera performance and i am feeling touch screen issue sometimes.

My Realme 3pro is disconnecting and reconnecting on its own with wireless Bluetooth device since few days. Its been only 10 days since I hv bought it .
I m very worried

I am using realme 3 pro. Since 2 months.But in this days and it gate hang and a straight line is appears on screen…

Go to Realme Service Centre or Try to Re-Start your Device.

I did asked a question already how to access Bluetooth APTX HD in the developers menu, but I’m also curious if Realme 3 Pro has updated the “EIS stabilization” for 4k and 1080p videos? The stabilization for videos has some issues, so I’m curious if this matter has been solved?

Guys, We are Interesting to know your Opinion in the Comment Section Down Below. Stay tuned for More Further Updates on Same.
WELL I DID COMMENT, BUT UNFORTUNATELY NO RESPONSE! ! ! ! ! ! !