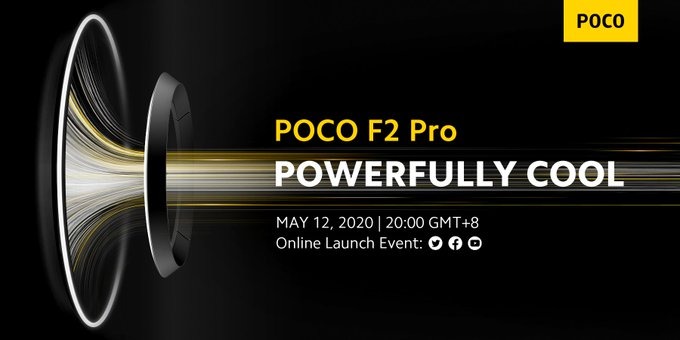 Poco upcoming one of the most awaited smartphones will go launched in a couple of months. Today Poco Global has officially confirmed the launch for the Poco F2 Pro. Let’s take a closer look at the need for an invitation and know more about it.

Poco F2 Pro will Scheduled to launch on May 12th, confirmed.

We already know a lot about the device as for the schedule, the launch event will be directly streaming on Twitter, Facebook, and YouTube at 5:30 PM IST. Worth mention, Poco Global has officially started sending its media invitation and the event going to organized in Spain.

As always, the device from the Poco is to Aimed at performance and speed. Whereas, it confirmed that Oppo F2 Pro is going to be angry branded Redmi K30 Pro. The device will bring the largest cooling paper chamber that size 3435 square meters of thermal efficiency of the device.

It will come with and 6.67 inches all super AMOLED display panel. That supports full HD+ screen resolution, where the device display is going to having a peak brightness of 1200 nits alongside DC dimming, Blue Ray filter, and HDR 10 support. Moreover, the device even includes an optical in-display fingerprint scanner and 92.7% of screen to body ratio.

Under the hood, the device has powered by Qualcomm Snapdragon 865 mobile processor. This Chipset coupled with and 12GB of LPDDR5 RAM and 512GB of UES 3.1 flash onboard storage. Additional e to deliver and power to the device with any 4700mAh battery using and 33 what fast charging solution bundled in the box.

In terms of camera performance, the device will have and Quad camera module housing a 64-megapixel primary Sony IMX686 sensor + 13 megapixel 123°FoV plus 2-megapixel portrait lens + 50-millimeter macro lens while the front is expected to be 20 Megapixel, selfie shooter. Furthermore, the device is running on Android 10 based custom skin MIUI 11 out-of-the-box.

Some reports suggest that the device will come in four different color options as namely White, Purple, Grey, and Blue. The starting price for the device would be €570 (~Rs 47,000) for 12GB memory configuration.

Thanks for being with us we would like to know your valuable opinion and feedback. If you have any query shared with us in the comment section down below. Stay tuned for more father updates in future on same