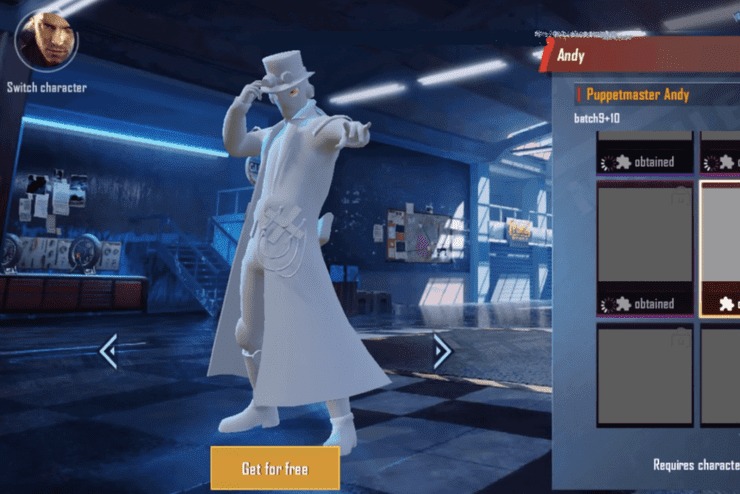 PUBG Mobile Season 13 will Release the Beta version 0.18.0 soon with added Some new features, such as Miramar 2.0, new game mode and also a new character. Earlier, the dev team added Sara and Victor with special bundles and Capability. But, In this upcoming PUBG Mobile season 13, developers of Tencent want to introduce a new male character named “Andy”. Moreover, the upcoming PUBG Mobile season 13 will also bring players many other features and skins.

In the Game, Andy is Basically a puppeteer and a magician. He lost his job and trained himself to revenge. Then, Andy became a gun master with a special skill. However, the unique skill of Andy is not available in Classic and Ranked Arena modes. You can only use his unique Capability of quick gun reloading in Evoground modes.

This new character is only available in the PUBG Mobile with beta version only. Tencent has not Still announced the release date of him in the global version. Some of the leaks say that he may come in the upcoming season 13. As season 13 will come at the beginning of this May.

To get this new character to your game, you need to pay UC to buy Andy. Then, you can upgrade him to level 10 at maximum. At each level, you can unlock some special features, such as voice messages and exclusive character emotes. Moreover, Andy also has a special bundle with exciting outfits. So, you can buy and use it.

Hopefully, We assume that this article remains informative for you, and You have successfully known about “New Character, Andy, To Come In PUBG Mobile Season 13”. Thanks for being with us, share your more valuable feedback and opinion If any query let us know in the comment section down below.