Motorola company has eventually Unveiled the high moto G7 of the device in Brazil and which covers the Moto G7, Moto G7 Plus, Moto G7 Power and Moto G7 Play but some of the features are the same.

Further, the smartphone has small waterdrop notch up top at the 6.25-inch display of the screen resolution has 2270x1080pixels with the FHD+.

Under the Hood, There is the latest octa-core Snapdragon 632 Soc coupled with 4GB of Ram, For instance, it packed the 64GB of internal storage. The device has Adreno 506 GPU of the graphics card performance.

In the back, It has a 12megapixel sensor with an aperture f/1.8 and 5megapixel sensor Dual Rear camera setup for the Video recording has the record the slow motion 2160p at 30fps

As for the Front, Selfie shooter has an 8megapixel sensor with the aperture of f/2.2 and the front video recording has record slow-motion range 1080 at 30fps.

The Handset is the capacity of 3000mAh battery and the supports the fast charging up to 15 watts.

Security level, there is the fingerprint sensor which rear side available and the software, it runs the Android 9.0 Pie out of the box.

The phone is available the two colours variant as like clear white, ceramic black and there is the price tag ~$431.08 convert roughly into Rs 30,750. 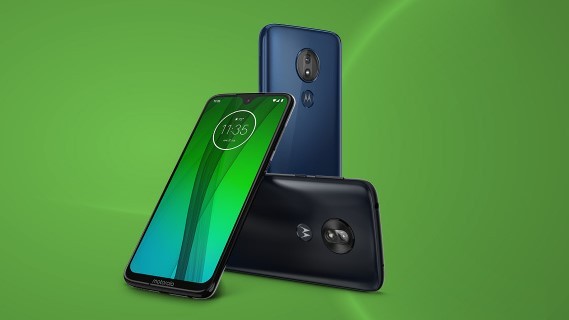 The handset has the waterdrop notch at the 6.24-inch display of the screen resolution has 2270x1080pixels with the FHD+.

At the board, It has the Powered by octa-core Snapdragon 636 Soc paired with 4GB of Ram, 64GB of internal storage and Adreno 509 amazing graphics card.

The smartphone has the 16MP and 5MP of the dual rear camera setup while the Front camera has the 13MP single camera.

There has the capacity of 3,000mAh battery and the battery supports the Turbocharging up to 27 watts. connectivity options include 4G VoLTE, 802.11 ac Wi-Fi, Bluetooth 5.0 and a bottom mounted USB Type-C port for charging.

The phone has a fingerprint scanner available in rear side and it runs Android 9.0 Pie.

Moto G7 Plus is available two colours which Indigo Blue and Ruby Red with the price of the device ~$511.69 convert roughly into Rs 36,500.

It has the powered the octa-core Snapdragon Qualcomm 632 coupled with 2GB Ram, 32GB internal storage. MicroSD card support up to 512GB and Adreno 506 GPU good performance.

Battery and other features

The handset has the 3000mAh battery with support the 10w turbo power charging and It has a fingerprint sensor, 3.5mm Headphone jack but It runs Android 9 pie For the colours, two colours available which starry black, deep indigo.

Moto offers a Decent Powerful Qualcomm Snapdragon 632 Soc coupled Wit 3GB of Ram and 32GB of Onboard Storage. Storage Can be Further Expand via MicroSD card up to 512GB. Also, There is an Adreno 506 GPU for Graphics Task.

The rear camera has 12MP with the LED flash an aperture of f/2.0 as the Front, selfie shooter has 8MP an aperture f/2.2. as a result, You have Many stunning Images Considering the Previous Moto Smartphone.

The Device Packed a Mind Wobbling 5000mAh battery along the Turbo Power Charging Technology. There is also a fingerprint sensor, 3.5mm headphone jack and the operating system runs Android 9 pie and the one colour variant available marine blue.

Check out on motorola.com

That is to say, This Time Moto Did a Amazing Work on there Smartphone,