Meizu launched its Meizu Note 8 in China With the Latest Budget With decent Specification. The Device is Quite  Similar Design Smartphone With its Own Meizu X8 Smartphone.

The Smartphone has a 6-Inch Full HD+ Display of Resolution 1080 x 2160 Pixel With an 18:9 aspect ratio, While it has a Metal Unique Metal Body Design Wit a Notch on the Top of Display. The Quality of the Display is to be delivered 450 nit brightness and 403 PPI.

Mezu Note 8 is powered by the Qualcomm Snapdragon 692 Soc Which is Built Processing of Cortex-A73 based cores Which is Couple With a 4GB of RAM + 64GB of onboard Storage and Which can be expanded Further via MicroSD card up to 128GB of Storage, While the device is boosted by the Adreno 506 GPU for Graphics. Under the Hood, it has a Dual Camera Sensor of Sony imx32 Primary 12MP + 5MP f/1.9 aperture Lens With 1.4µm pixel and Dual Pixel AF on the back of the Device. There is an 8MP f/2.0 aperture Front Selfie Shooter. 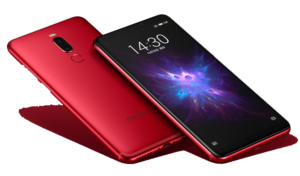 The Device has a Face Unlock technology, While it also offers the Fingerprint Sensor on the back of the Device. The Meizu Note 8 run over Android 8.1 oreo out of the Box With its Own Custom Skin of FlymeOS. It also Offers a Massive Battery of 3600mAh Which Supports 18W Quick Charging via Micro-USB Port. Also, the Device Comes With and 3.5mm Audio Jack on the Bottom of the Device.

Read More: THE SAMSUNG GALAXY A6S ANNOUNCED IN CHINA -NOT MADE BY SAMSUNG

It has five Different Color variants of Dark Gray, Blue, Smoke Purple and Flame Red With the Price tag of ~$187 in China from Nov 1st, Wait to announced to launch in India Device Soon. Let us Know What did you think about the Device. Stay tuned for More Updates.