The Meizu M9 Note spotted on Teena, which has Android Pie, 3900 mAh battery and Qualcomm Snapdragon 675 Octa-core processor. This device may be expected to launch on 14 Feb 2019 in India.

Performance Of The Meizu M9 Note

The Meizu M9 Note has the latest Qualcomm Snapdragon 675 Octa-core chipset. This chipset coupled with 6GB Ram and 64GB and 128GB storage Onboard which is enough to download to your data music and videos and also further increased up to 512GB, which gives better performance and you can easily use multitasking for apps in this device without hang problem. This device runs the latest Android 9 Pie out of the box with Flyme OS 7 on the top.

The Meizu M9 Note has 48MP+5MP dual rear camera with an aperture f/1.8 and 20MP selfie camera on the front. This device has expensive look & design. Some other feature on the camera Digital Zoom, Auto Flash, Faces detection, Touches to focus.

The Meizu M9 Note has 6.2-inch Full HD+ IPS display. It comes with a high screen resolution of 1,080 x 2,244 pixels and their aspect ratio is 19:9. This device has a massive 3,900 mAh battery which is easily used to almost 2 days. This device expected to support wireless 15W charging

Sensors on the device include an accelerometer, gyro sensor, a geomagnetic sensor, hall sensor, proximity sensor and RGB light sensor and this device has a rear-mounted fingerprint scanner. Connectivity options in the smartphone include 4G VoLTE, Wi-Fi 802.11 a/b/g/n/ac, and Bluetooth 5.0. It has a 3.5mm Headphone jack and speaker on the back side. 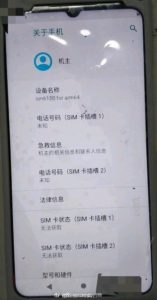