In the previous week, Honor 8A smartphone was confirmed to be launching which January 8th in China. the device will be coming with entry-level specifications, after Xiaomi MI Play that was announced the device in December 2018, this is the second smartphone of Honour 8A which came with the fueled by MediaTek helio p35 chipset.

Display.
The handset has been fitted to 6.09-inch display with the Waterdrop notch display on the IPS LCD Pearl FullView display screen resolution has 1560 × 720 pixels HD+, it has an aspect ratio of 19:5: 9, screen to body to body ratio of 87% and then it is a screen to device protected 2.5D curved glass display.it has the 283PPI pixel density.

Processor.
Under the Hood, it the latest Helio P35 chipset, it has powered by the  octa-core processor, it works the 2.3 GHz coupled with 3GB of Ram, the device has taken the 32GB and 64GB storage models, storage can be supported to overall 512GB Via the MicroSD card slot.there has the ADRENO PowerVR GE8320 GPU.it runs the Android 9.0 Pie top on the EMUI 9.0 .

Camera.
The backside of Honor 8A, there is the 13MP of the rear side with the single LED flash, it has an aperture of f/1.8 and autofocus.for the front camera which it is the fixed facing of the 8-megapixel camera, aperture of f/2.0. 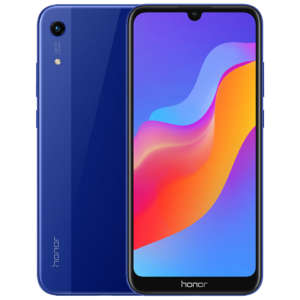 Check out on vmall

Price and colours.
It has 32GB and 64GB storage editions of the Honor 8A are the price of 799 Yuan (~Rs. 8,150) now, the price tag of the 64GB variant did not come. the smartphone can be purchased in colours like Magic Night Black, Aurora Blue and Platinum Gold.the shipments of the smartphone Honor 8A will start on Jan 8.

Thanks for Being WIth us, Write your Thoughts in the Comment Section Below. Stay tuned for More Further Updates, For Biggest Tech Show CES 2019 Updates, Visit Our CES 2019 News.