The Honor 10i with kirin 710 annouched in Russia.

The Honor 10i with kirin 710 annouched in Russia

The Huawei Sub-Brand Honor has launched its phone Honor 10i in Russia. This device has Latest Kirin 710 Processor with Mali-G51 MP4 Graphics card coupled with 4GB and 64GB storage Onboard. In this device, you can easily Multitasking So, In which phone has run Latest Android Pie out of Box with Huawei’s EMUI 9.0 overlay on the top. This device has 2.2 GHz octa-core  (Cortex A73 + 1.7 GHz, Quad core, Cortex A53).

The Honor 10i, triple Horizontal Camera On the backside and single Camera On the front. In which has 24MP+2MP with their aperture f/1.8 and f/2.4 and there is an 8MP with f/2.4 ultra-wide-angle camera, on the Rear and 32MP on the front. Both rear and front camera based on Al features. So this device captures a high-quality picture with there image resolution is 4128 x 3096 Pixels and shoots videos. Some other feature on the camera Digital Zoom, Auto Flash, Faces detection, Touches to focus.

This device has come water notch type display which has high resolution. It has 6.21 inches (15.77 cm) IPS LCD display with their have 2340×1080 pixels display resolution. Their Aspect ration is 19:5:9 and the expected screen to body ratio is 84%. There has a massive 3400 mAh Lion-polymer non-removable battery. This phone has may support fast charge you can easily use to approx 2 days with micro USB 2.0. 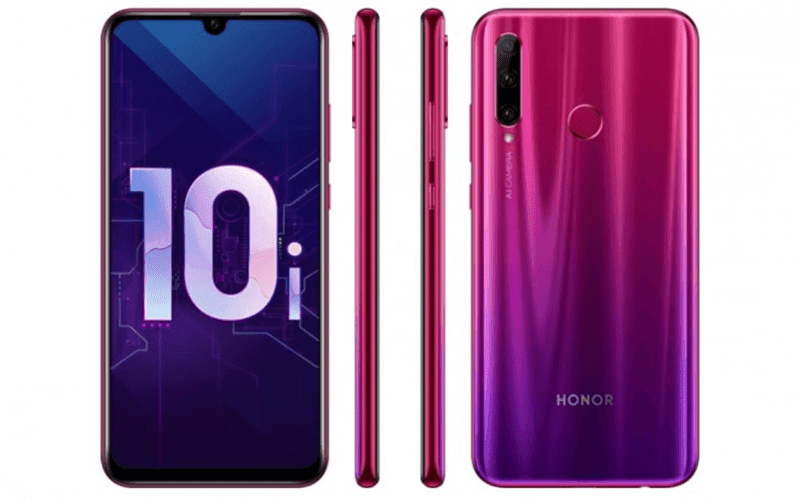 Sensors on the device include an accelerometer, Rear mounted fingerprint sensor, gyro sensor, a geomagnetic sensor, hall sensor, proximity sensor and RGB light sensor. For Connectivity options in the smartphone include 4G VoLTE, Wi-Fi 802.11 a/b/g/n/ac, GPU Turbo 2.0 technology, and Bluetooth 5.0. it comes with 3D gradient finish on the backside.

The Honor 10i comes three different colours Red, Blue and Black and there price around 21000 INR. This device better than honor 10 lite so it gives better performance

Thanks for Being With us, Share your thoughts in the Comment Section Down Below. Stay tuned for More Further Updates.