Samsung is Preparing it’s A Series for the Upcoming Year, This Year the Device Was Huge Hit for Samsung. Samsung A71 CAD High-Resolution Renders is been Posted
by cashkaro. Which Unvield Some of the Important Aspects of the Device Such as the L-Shaped Camera Module.

It Supposes to Comes with a 6.7-inch Display Panel With a 2.5D Curved Glass Design, Where the Display Panel Feature an Infinity-V or Infinity-O Display Based on the Final prototype. Meanwhile, the Device Might be Similar to Galaxy Note 10 or Upcoming Note 10 Lite.

In the Terms of Camera Performance, The Devie Will Offers an L-Shaped Camera Module or could be a Standard Upcoming Camera Module. According to Some Reports, The Device having a Vertically-aligned Rear Camera Module and there Will be Quad Camera Housing alongside a LED Flash.

Furthermore, The Device Possibility Support using a High-Resolution Camera Pixel Count as a 108MP ISOCELL bright HMX Because in Past the Galaxy A17 Uses a 32MP and Galaxy A71s uses the 64MP Primary Sensor. It is expected to run on Android 10 based One UI 2.0 Out of the box. 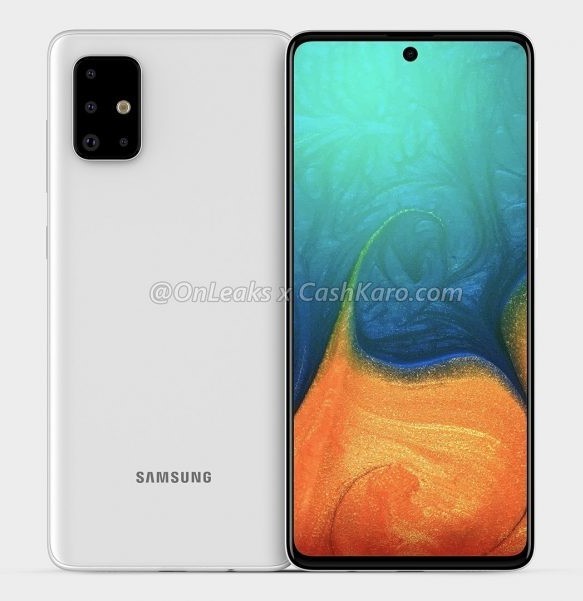 Under the Hood, The Device is Reportedly Comes With a 5G Connectivity and also to be released in China. This Device Might be Using a Samsung’s In-House Exynos 980 Soc Coupled With at least 4GB of Ram and 128GB of Onboard Storage. Also, the Device Initially Comes in Black Silver, Blue and Pink Color Option.

The Dimension of the Device Measured as the 163.5 x 76 x 7.9mm. This Devie Still Remain the 3.5mm Audio jack at the Bottom Edge alongside a Loudspeaker Grills.
Volume Rockers and Power Button Placed at on the Right and Sim Tray on the Left.

Thanks for Being With us, Share your More valuable opinion and feedback in the Comment Section Down below. Stay tuned for more further updates.