Samsung Galaxy A30 is spotted on the Geekbench, Exynos 7885 with 4GB RAM

Samsung Galaxy A30 spotted on Geekbench,

Samsung will launch new Samsung Galaxy A30 spotted on Geekbench. Samsung Launch midrange price smartphone in Indian market Samsung Will Introduced More A-Series Smartphone as A8S, A40 and A50. These Device Will be Powered by Samsung Own Exynos 7885 and Exynos 9610 Soc respectively. Samsung Start Shipping These devices in Q1.

The Samsung Galaxy A30 is may powered by Samsung’s own Exynos 7885 chipset. This chipset coupled with 4GB of RAM and two different 32GB and 64GB storage varient onboard.

Storage Can be further Expand up to 512GB via using microSD card. It will run latest Android v9.0 (Pie) out of the box and there has 1.59 GHz base frequency. The Geekbench leak reveals what could be the specifications for the model number SM-A305F, which will be launching the Samsung Galaxy A30.

Samsung Galaxy A30 is spotted on the Geekbench 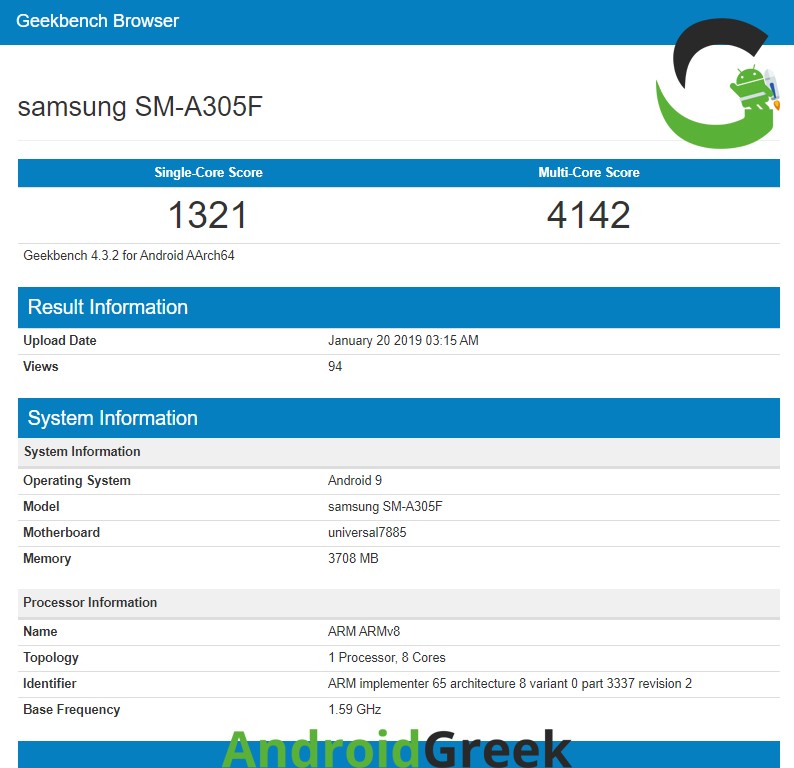 The Samsung Galaxy A30 comes with high full HD+ resolution and an aspect ratio of 19:9. This device expected screen to body ratio is 82%, and there has a massive non-removable battery. This phone has may support fast charge with the type-c port.

Sensors on the device include an accelerometer, Rear mounted fingerprint sensor, gyro sensor, a geomagnetic sensor, hall sensor, proximity sensor and RGB light sensor for Camera. for the other Connectivity as like it supports Wi-Fi 802 /g/n, Bluetooth 4.2 Low Energy, GPS with A-GPS, GLONASS, and Dual 4G VoLTE. The device has the 3.5mm Audio Jack.

Thanks for Being With us, Share your thoughts about this Device in the Comment Section Down Below. Stay tuned for More Further Updates on Same.