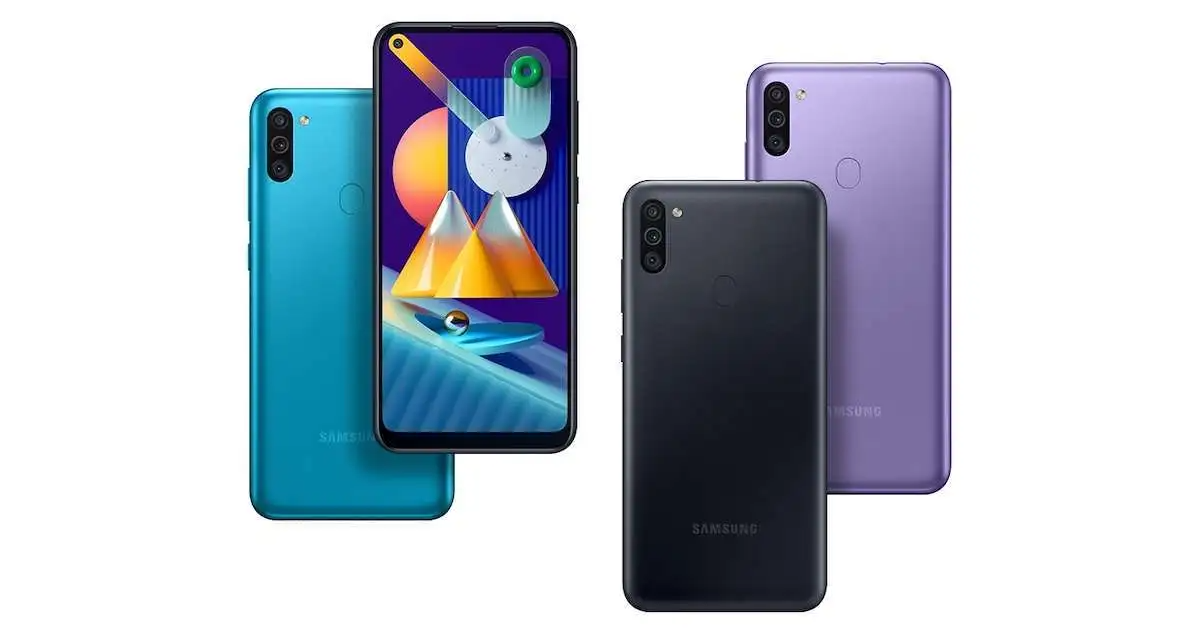 Samsung has officially launched the Galaxy M11 and Galaxy M01 in India, Here it was an affordable smartphone set for Under ₹10,000/- and ₹15,000 segment respectively. The device seems to be quite promising and the device was already launched globally last month. So let’s take a closer look at the device and know more about it.

It comes with a 6.44-Inch of HD+ display featuring an LCD Display with a punch-hole camera cutout. The Display is a 1560 x 720-pixel resolution offering in a 19.5:9 aspect ratio. Under the hood, the device is been powered by Qualcomm Snapdragon 450 Mobiel Platform coupled with a 3GB of Ram and 32/64GB of onboard storage. Further, you can expand the storage using a dedicated MicroSD card slot up to 512GB Storage.

for connectivity the device having a Dual 4G LITE, Wi-Fi, Bluetooth 5.0, GPS, and MicroUSB Port. In the terms of camera performance the device having a Triple rear camera housing a 13MP Primary + 5MP Ultra-Wide angle lens + 2MP Depth sensor. While the front having an 8MP Selfie shooter.

Furthermore, the device packed a Rea munted fingerprint sensor alongside a Facial Recognition for Biometric Privacy Authentication. Meanwhile, it also has a Dolby Atmos Support and to power, the device is equipped with a 5000mAh battery using a 15W of fast charging solution bundled in the box.

It comes with a 5.71-Inch of HD+ Display featuring an Infinity-V Display panel that supports 720 x 1560 pixel resolution, Whereas it having a Waterdrop notch and delivers a 19:9 aspect ratio. Under the hood, the device is to be powered by Qualcomm Snapdragon 439 Soc paired with a 3GB of Ram and 32GB of onboard storage, Further, you expand the storage using MicroSD Card slot up to 512GB of Storage.

In terms of camera performance, the device has a Dual rear camera housing a 12MP Primary + 2MP Depth sensor. While front having a 5MP Selfie shooter, Therefore the device doesn’t have a rear-mounted fingerprint scanner instead it having Facial recognition using Face Unlock for biometric security authentication. In contrast to power the device. it equipped with a 4000mAh battery and it also supports a Dolby Atmos.

The Starting price of the device is ₹8,999 for Galaxy M01 and it was for the Solo 3GB + 32GB memory configuration. While the Galaxy M11 will available in two different variations following the 3GB + 32GB and 4GB + 64GB will price at ₹10,999 and ₹12,999 respectively. Meanwhile, the device will initially available fro the Galaxy M11 was Metalic Blue, Black and Violet color option, and the Galaxy M01 available in Black, Blue, and Red color option. The device will be available on Flipkart, Amazon, and Samsung e-store alongside Major retails stores from June 2nd.

How to Download and Install Lineage OS 17.1 for Xiaomi Redmi 5A [Android 10]