The Xiaomi Mi 9T Pro Teased on Geekbench. It is a Rebranded of Redmi K20 Pro. It features to 8GB Ram with 128GB storage on the board.  This device powered by Snapdragon 855 Chipset.

The Xiaomi Mi 9T Pro has powered by the Qualcomm Snapdragon 855 octa-core processor clocked at 2.2GHz for the enhanced gaming experience & performance. This device paired with 8GB RAM and 128GB storage onboard, Which further increase up to 512Gb via using a microSD card. It runs the latest Android Pie V9.0 based on EMUI 10. 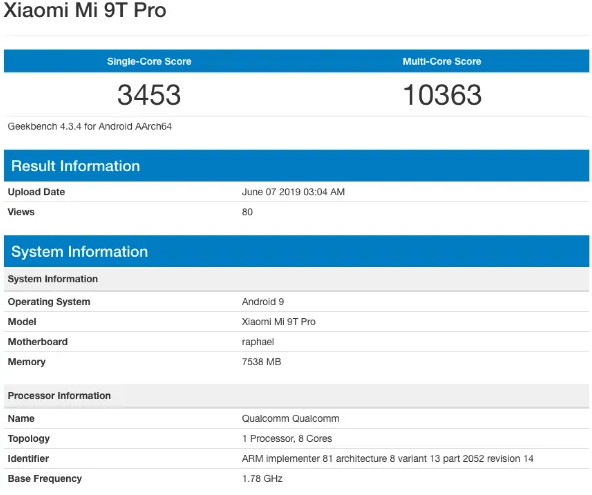 Sensors on the device include an accelerometer, Rear mounted fingerprint sensor, gyro sensor, a geomagnetic sensor, hall sensor, proximity sensor and RGB light sensor. Moreover, Connectivity options in the smartphone include 4G VoLTE, Wi-Fi 802.11 a/b/g/n/ac, and Bluetooth 5.0. It has also 3.5mm headphone jack and there is USB type-c port and possible to support fast charging.

Redmi is Going to Launched its First Flagship Killer Smartphone on May 28th in China. We have Some Confirmed Specification about Redmi K20. As Far We know it Will be a Mid-Premium Budget Smartphone as Value for Money Flagship Smartphone. The Device Will Powered by Qualcomm Snapdragon 855 Soc along Massive 4000mAh battery Support 27W Fast Charging Readmore

Let us Know What did you think about this Device in Comment Section Below? Stay tuned for More Further Up