Vivo 93 Launched in China as Vivo Y95 in the Philippines

Recently Vivo launched its Vivo Y93 in China, and Now vivo launched its latest mid-range smartphone Vivo Y95 Smartphone in Philippine. However, the Same Device launched in China as vivo Y93 and Vivo Y85 in the Philippines.  it is the first Smartphone from Vivo in Y Series to feature a Full View Halo display, Which is Similar to Vivo V11 Pro.

It has 6.22-inch HD+ IPS LCD display with the Resolution of 1520 x 720 pixel along with 19.5:9 aspect ratio, Including a waterdrop style notch on the top of the display.
Which offers an Edge-to-edge display of 88.6% screen to body ratio. There is Slightly thick chin on the bottom of the Device.

The Device is Powered by the 12nm octa-Core Qualcomm Snapdragon 439 Soc Which Clocked at 1.9GHz Coupled With 4GB of Ram and 64GB of Onboard Storage. Storage Will is Further Expandable via MicroSD card Slot. While It was Boosted With Adreno 505 GPU for Graphics performance. as the Device Sensor Required for the Smooth running of the Smartphone it has all the Basic Sensor.

Vivo Y95 run over Android 8.1 oreo with vivo Custom Skin Funtouch 4.5 out of the box, Not to Mention it has AI Integration to enhance the User Experience. They also Featured there own AI Assistant as Jovi and There Game Booster to Boost your Specific application. 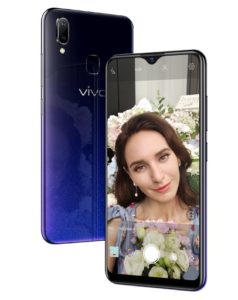 The device has a rear Fingerprint Sensor along Side With Face Unlock. While the Device has a massive 4030 mAh battery with a Smart-energy Power Management System.

The Device will be available initially in Two colour variants of Night Black and Aurora Red Color.
Where the cost of the Device Will is ~$264 We can Expect the official launched As Countries as Well in India Later this Month.

Let us Know, What did you think about this device in the Comment Section below! Stay tuned for More Further Updates.