Samsung Galaxy M30 with the new Infinity-U display, so a small notch.

Galaxy M Series with the new Infinity-U display, so a small notch.

Samsung will launch three M series smartphone in India in this month. which is M series new phone  Galaxy M10, Galaxy M20, Galaxy M30 and Samsung Galaxy M30 launched on January 2019. south Korean of the new all M-series are seeing to busy of  M30 and All the M Series smartphone has seen the U-infinity display from Samsung.

Samsung has the sports of 6.38 inches with Waterdrop notch on the 1080 x 2280 pixels has the screen resolution full HD Screen, it has an aspect ratio of 19.5:9, there is the pixel density 403  PPI.it has the bezel-less display in side by side.

According to the information, The Device Will be Powered by 1.59 GHz Exynos 7885 SoC Coupled With 4GB of Ram, storage can be further expandable up to 256GB Via MicroSD card.it runs the Android 8.1 Oreo out of the box.

In terms of the camera, according to the leaks, rear camera triple camera set up which there has the 13MP + 5MP + 5MP ultra wide telephoto lens for taking portrait images triple rear camera setup with LED flash, as for the front side, it has a 16MP of the front camera. but there has no kind of the aperture lens size and options. 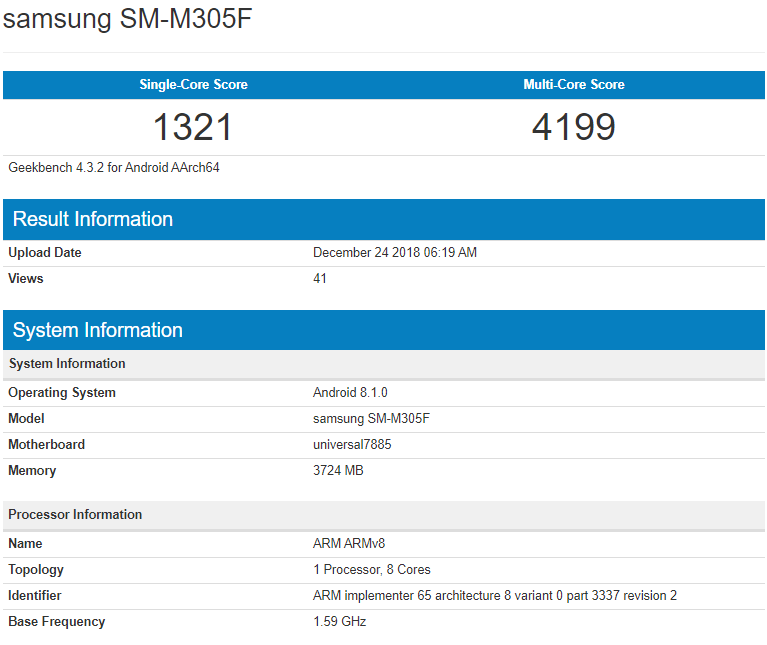 The smartphone has the capacity of Massive 5000mAh battery Li-polymer type of the battery and the users keep the good interest of battery backup. some features of this device Bluetooth v4.1 or above, ambient sensor, proximity sensor. The dimensions of 59 x 75.1 mm and is around 8.4 mm thick.

Read Also: HONOR 8A IS SPOTTED ON TENAA AND EUROPE’S EEC

Thanks for Being Wit us, Share your thoughts in the Comment Section Below. Stay tuned for More Further updates.