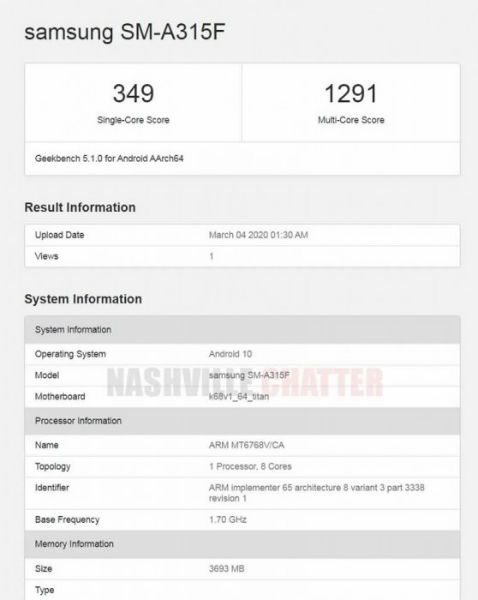 The Samsung Galaxy A31 has appeared on Geekbench with model number SM-A315F. In terms of the Geekbench Score, This device has Gets score 349 points in single-core and 1,291 points in Geekbench 5.1 multi-core test. Also, this device has spotted listing on the Bluetooth SIG website with the SM-A315F_DS model number. The site suggested Bluetooth v5.0 on the new smartphone.

Specification of Samsung Galaxy A31

The Samsung Galaxy A31 Has powered by a MediaTek Helio P65 with latest GPU. This Chipset Coupled with the 4GB of RAM 64GB storage on board with UFS 2.0. It runs the latest Android 10 with Latest OneUI 2.0 Out of the box. 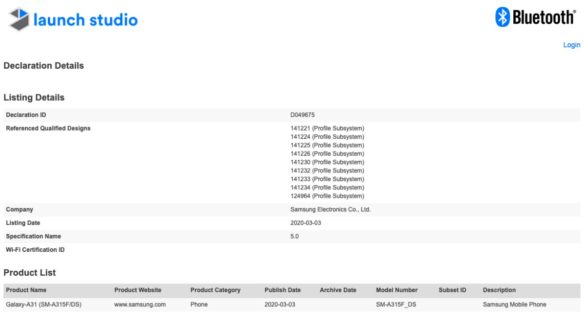 It Features to Full HD+ with 1080*2256 pixel resolutions. Moreover, This device has packed with Massive 5,000mAh Battery,  It could be Support fast charging.

Let’s Talk About the Camera, This device has come with dual Camera on the Rear Panel using with 48MP primary sensor, 5MP Depth Sensor. For the Front, There has a 25MP selfie Camera for Video calls and Capture a Beautiful picture.  Some other Features on Camera include HDR, Nightscape, Chroma Boost, Slow-motion 480p for  120fps, PDAF, Portrait mode, AI Beautification, panoramic view, and time-lapse.

Sensors on the device include an accelerometer, a gyro sensor, a geomagnetic sensor, a hall sensor, proximity sensor, and an RGB light sensor. So, Connectivity options in the smartphone include 4G VoLTE, Wi-Fi 802.11 a/b/g/n/ac, and Bluetooth 5.0.

How to Download and Install TWRP Recovery for Realme X | Guide