Samsung has worked on there upcoming affordable Smartphone form offline segment, the Samsung Galaxy A21s. The device has recently received its Wi-Fi alliance certification and from a various authority such as fcc and Bluetooth SIG. The equipment used to be quite promising so blessed to get user device and know about it.

The device having and a lot of numbers but the certification for the Samsung Galaxy A21S with an internal model number SM-A21F/DS. However, the device does not reveal any significant key specification of the invention.

Moreover, we have also spotted the same device on the Geekbench benchmark. That reveals some of its specifications. Likely the device is going to powered by Samsung in-house Exynos 850 mobile processor based on octa-core paired with 3GB of Ram. Additional e the machine is running on Android 10 based custom skin OneUI v2 out of the box.

Furthermore, the device will initially well come in a four different colour variant as Black blue white and red colour option. Therefore there will be two different memory configuration as 32GB and 64GB of onboard storage. 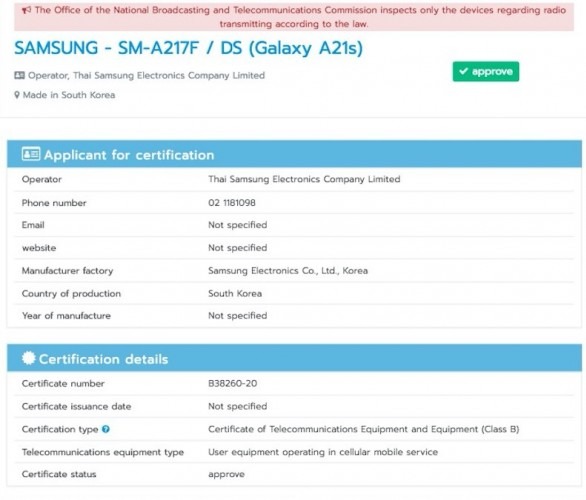 According to the report, the device will be the comfort and 6.55 inches of HD+ display panel. In contrast, the device will have an award via camera module housing and 48-megapixel primary plus 8-megapixel Ultra wide-angle lens + 2-megapixel macro and 2-megapixel depth sensor. It will be a cube with a 5000mAh battery as per the source. We believe the device seems to be launch imminent.

Unfortunately, there is no for the details available yet, thanks for being with us we would like to know your valuable opinion and feedback. If there is any query share with us in the comment section done below. Stay tuned for more further updates in future on same