South Korean Tech Giant Going to Introduced it’s A series in India Soon. The Smartphone Will be a Galaxy A50, Galaxy A30 and Galaxy A10.

Samsung is Focusing on the Price range of Rs 10K to 50K, Also Compete With Chinese Tech Giant Xiaomi and Huawei. On the Other Hand, Smartphone Manufactures Like Oppo and Vivo to. 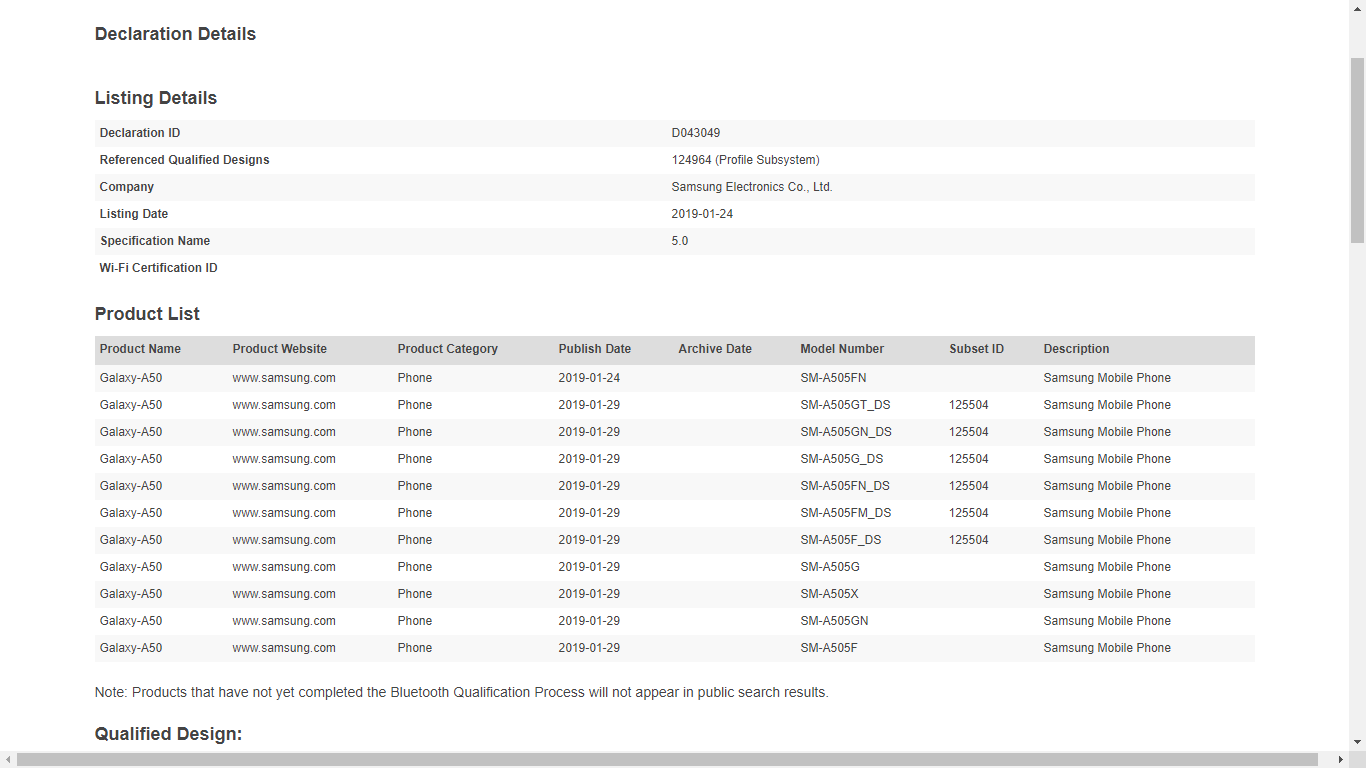 it Comes out With 6.4-inch Super AMOLED Display of 19.5:9 aspect ratio along with a Full HD+ Resolution of 1080 x 2340 Pixel. The Display has been a Waterdrop Notch Design as Infinity-U Display Panel and it has Always On Display.

Under the Hood, it is Powered by Samsung Own Octa-Core Exynos 9610 Clocked at 2.3GHz. Soc is Coupled With 4GB and 6GB of Ram along 64GB and 128GB of Onboard Storage. Storage Can Be Further Expandable Up to 512GB of Storage.

Above all, It brings a Massive 4000mAh using 15W Micro Type-C connector Fast Charging. Further, there is an In-Display Fingerprint Sensor.  There Would be a Triple Slot Sim Tray type. However, it comes as a Dimension of 158.5 x 74.5 x 7.7mm.

In the Terms of Camera Performance, There Will be a Triple Rear Primary 25MP AF if f/1.7 + Depth 5MP FF of f/2.2 and Ultra-Wide 8MP FF f/2.4. However there Will be a 25MP Selfie Shooter inside the Waterdrop Notch of an aperture of f/2.0.

Galaxy A50 is a Using a 3D Glossy Plastic Design as an Initial Color Black, White and Blue Color Varient and Featured a Bluetooth 5.0 certification 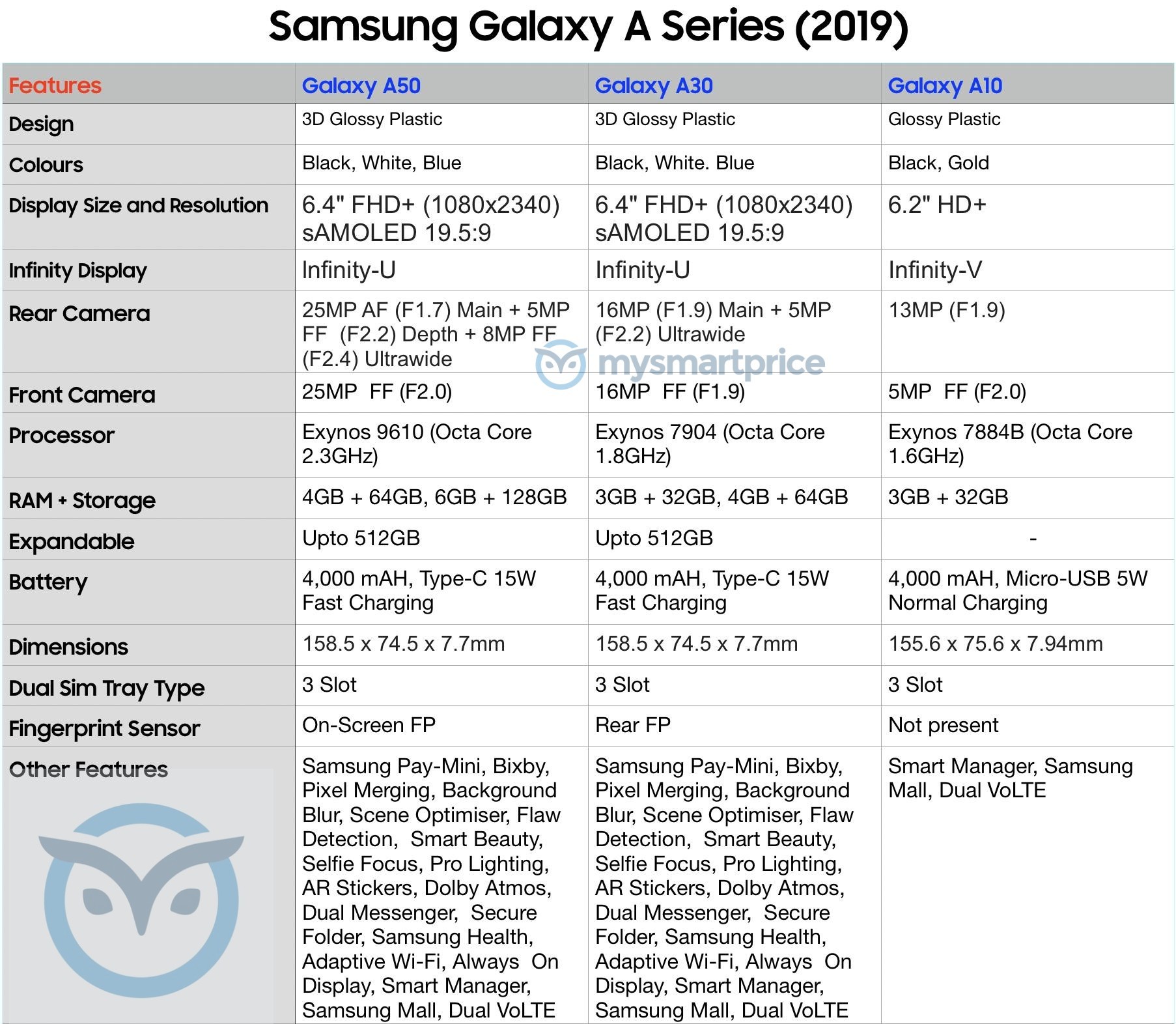 As Same it also Comes With a 6.4-inch FULL HD+ Super AMOLED Display of an aspect ratio of 19.5:9 as 1080 x 2340 Pixel. The Display is been an Infinity-U Panel. Which also Features an Always On Display.

for instance, it has a 3D Glossy Plastic Design and Comes in Black, White and Blue COlor Varient. 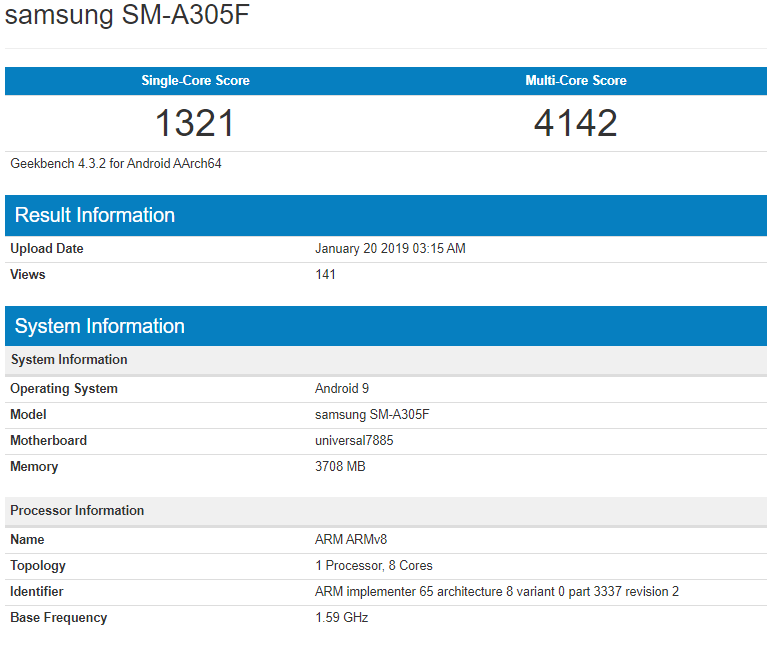 It is a Least a Looking Like a Decent Smartphone as It Has a 6.2-inch HD+ Infinity-V Display Panel. As it Features a 13MP Rear Camera Sensor of f/1.9 aperture and a 5MP FF Selfie Camera Using an F/2.0 aperture.

The Device is Powered by Samsung Own Exynos 7884B Octa-Core Soc Clocked at 1.6GHz. A chipset is Coupled With 3GB of Ram and 32GB of Onboard Storage. It packed a Same Massive 4000mAh battery Using Micro USB Standard Charging. As for Dimension it Covers a 155.6 x 75.6 x 7.94mm.

However, it Doesn’t Include and Fingerprint Sensor Might be Affect the Cost to Help for a Budget Smartphone. The Device Brings a Glossy Plastic Design With Black and Gold Color Varient. It Runs over Android 9.0 Pie out of the Box.

Read Also: SAMSUNG GALAXY S10 LEAKS AND RUMORS: EVERYTHING YOU NEED TO KNOW!

Thanks for Being With us, Write your Opinion in the COmment Section Down Below. Stay tuned for More Further Updates on Same in Future.

Garmin express is a software application desighned by the company to update, install and manage all the garmin devices from your desktop only.