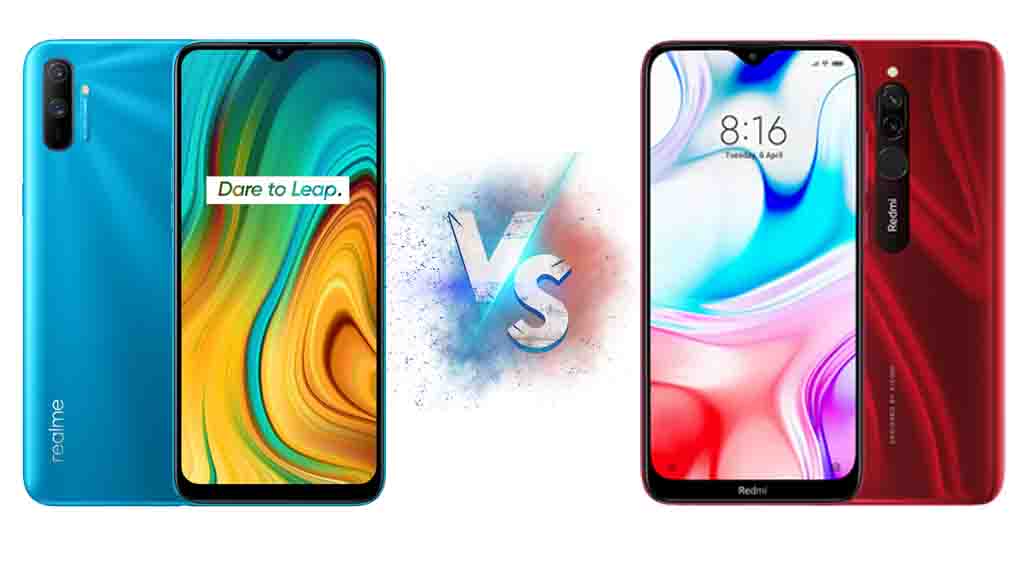 Realme Launched its new smartphone in India called as Realme C3 with lots of new features and latest Technology. Realme C3 has powered by MediaTek Helio G70 Soc with Up To 4GB of RAM. Today Compare Realme C3 vs Redmi 8 Full specification and Price.

Realme C2 has powered by Latest MediaTek Helio G70 Soc build on 12nm. This chipset coupled with the 4GB Ram and up to 64GB Storage on-board. Storage can further increase up to 512GB via using MicroSD card. While the Redmi 8 Powered by Octa-Core Qualcomm Snapdragon, 439 Soc Coupled With 3/4GB of LPDDR3 Ram and 32/64Gb of eMMC V5.1 of Onboard Storage. To Boost the Performance, it having an Adreno 5050 650MHz Graphics For Better Gaming Performance. You can Expand Storage using Dedicated MicroSD Card up to 512GB.

In terms of the Camera, Realme C3 comes with the Dual Rear Camera setup on the Real Panel using 12MP primary sensors with f/1.8 aperture and 1.25μm ultra-large single-pixel area, and a 2MP secondary camera with f/2.4 aperture. For the Front, There has a single 5MP Selfie Camera. While the Redmi used the Same Camera sensor on the Real Panel But Different 8MP Selfie Camera instead of 5MP, which used in Realme C3. Some other Features on Camera include HDR, Nightscape, Chroma Boost, Slow-motion 480p for  120fps, PDAF, Portrait mode, AI Beautification, panoramic view, and time-lapse.

Realme C3 Has Features to 6.5-inch waterdrop notch display with the HD+ 720×1600 pixels Resolution. There was an 89.8% screen-to-body ratio. For Protect the Screen, Realme uses Corning Gorilla Glass 3 protection. Redmi 8 6.26-inch Display With a Waterdrop Notch  Display. The Display used in the device is an IPS (In-Cell) With a 1520×720 Pixel Resolution HD+ Screen at a Pixel Density of 270PPI. The Panel is a 2.5D Curved Display from Corners and Well Protected by Corning Gorilla Glass 5.

To Power Supply, Realme C3 has Packed with the Massive 5,000mAh battery with 10 W Charging support. While the Redmi Used Same Battery but Different 18W fast Charging Support. Redmi 8 has a Fingerprint Scanner on the real Panel, but Realme doesn’t have a fingerprint scanner.

Sensors on the device include an accelerometer, gyro sensor, a geomagnetic sensor, hall sensor, proximity sensor, and RGB light sensor. So, Connectivity options in the smartphone include 4G VoLTE, Wi-Fi 802.11 a/b/g/n/ac, and Bluetooth 4.2. It has a 3.5mm headphone jack with external speakers.