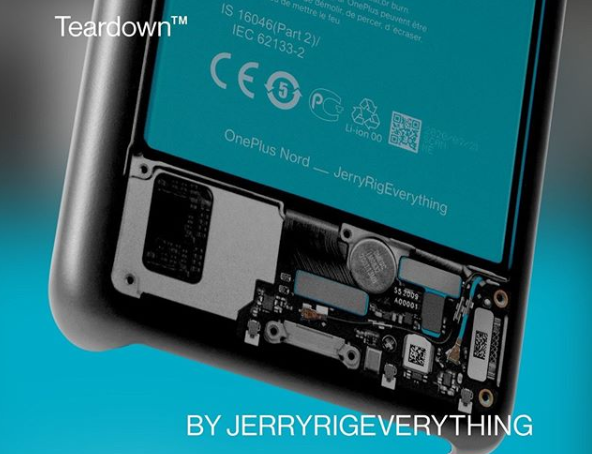 Oneplus upcoming budget affordable smartphone, the Oneplus Nord is about to launch. Meanwhile, they have officially announced the brand custom skin Zackl of JerryRig Fame. Here some it seems to be quite beautiful, so let’s take a closer look toward the device and know more about it.

What’s the #OnePlusNord got to hide? Nothing at all. That’s why we teamed up with @ZacksJerryRig to produce this officially licensed @dbrand Teardown™️ case. Quantities are limited – get yours on July 21. #NordCreator

Jerry Rig is a well-known name for the teardown videos, and since they have working on youth and affordable smartphone. The device they

were going to launch likely they have shown the interior of the device in the custom skin.

Here, the device having a blue colour battery and the interior of the device seems quite clean. Here they have arranged the hardware so preciously suggesting they were so proud of the engineering they have done. Moreover, Apple notably also having a neatly arrange device interior.

Here we can clearly see the battery packed, to power the device it was going to equip with a 4115mAh battery and it was going to use a 30W of fast charging solution bundled in the box. Unfortunately, there are no price details revealed yet.