To Compete With Some of the Gaming Smartphone Companies ZTE Sub-brand Nubia Finally launched its Nubia Red Magic Mars. The Device Probably Don’t need any Kind of Introduction as It was is Dedicated to Gamers, While it Has all the Design Cuts and LED strip to Looking Like a Beast.

The Device Comes With a 6-inch TFT LCD Display of Full HD+ (2160 x 1080 Pixel) resolution Without Notch on top of the Display. The Display isn’t a 120Hz as Razer Phone Does and its Pixel Density is 403. But it has shoulder triggers Similar to Asus ROG.

In the Terms of Performance, it uses 2017 10nm Qualcomm Snapdragon 835 Soc Coupled With 6GB,8GB and 10GB of Dual Channel LPDDR4X Ram With the storage of 64Gb, 128Gb and 256GB of UFS 2.1 Storage Respectively. It, not only Device Which Comes WIth 10GB of Ram. Storage Can’t be Further Expandable.

We already Seen the Device With 10GB of Ram “Xiaomi Mi Mix 3“. Not to Mention that it Has CPU and GPU Control Panel to Monitor Performance, as Well as Temperature With Dual Heat Pipe. The Device also Support a DTS 7.1 (Stereo Speaker) and Force Feedback. A chipset is Boosted Via Adreno 630 for Graphic Task. 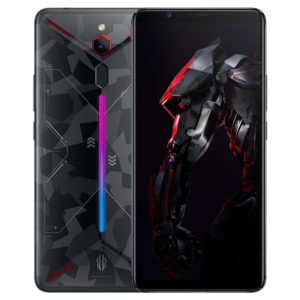 Nubia Red Magic Mars Run over Android 9.0 Pie Based Redmagic  OS V1.6 Skin on the Top of android.
It Doesn’t Miss a Headphone Jack because as it Consider as Gaming Smartphone. Also, Nubia Include a Gamepad attachment Which is Quite Similar to Nintendo Switch. Nubia also Offers a Massive 3,800mAh with fast charging support Where its UI has GameBoost for an Optimize Performance.

Tell Us What did you think about this Device Let us Know in the Comment Section Below, and For More Further Updates Stay tuned With AndroidGreek.