$349 affordability to a flagship phone

HMD Global launching  Nokia 7.1 With a Designed as a Glass and Aluminum frame With a 2.5D Curved Glass

This device has 5.84-inches IPS LCD it has the screen to body mass ratio 18.7:9, while the phone has provided screen resolution of 1080×2246 pixels, pixel density is 403 PPi. There is a Notch on the Top of Display for Bezel Less Smartphone alongside WIth a 3.5mm Audio Jack. while It comes with a Corning Gorilla Glass 3.

In the Terms Of camera, it has Dual rear Zeiss-branded 12MP + 13MP Camera Sensor of resolution 4000 x 3000 with it has provided by Exmor RS CMOS sensor capacity of aperture f/1.8 with already has OIS (optical image stabilisation) and this type of dual tone LED FLASH.

while front camera has the 20MP Selfie Shooter With an aperture has f/2.0 one of most features as like autofocus, continuous shooting, HDR, digital zoom, auto flash, touch to focus, face detection. Which can record up to 2160p at 30fps With a live bokeh, AR emoji, Google Lens, pro mode, and more. 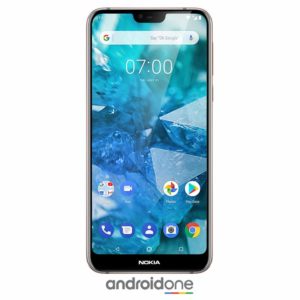 The device has provided 64 bit which is run the internal storage has existed the 64GB then  Storage Will be further Expand Via MicroSD card up to 400GB. Where the Device is Run over android 8.0 oreo as Google Android One Programme. Which means You will get faster latest Android Updates in future.

the phone has come with a 3060mAh Li-on battery and has fast charging With USB Type-C (USB 2.0).  which is a long time charge. It also Features a rear fingerprint sensor. in the rear side, some sensors come accelerometer, proximity sensor, light sensor, compass, gyroscope.

It Goes on sale With two Color variant of Gloss Stell and Gloss Midnight Blue With the Price Tag of ~$364 for 32GB, While ~$398 in the UK.

Tell us your opinion about this Smartphone in the Comment Section Below! Stay tuned for Further Updates.

You got me at “geniuses at Nokia”.