Last Month at the IFA 2018 Event, The Honor announced its Upcoming Flagship Which is a Successor of Honor Magic launched in Dec 2016. The Magic 2 Smartphone. Honor Confirmed the Device will be Powered by its Own House New 7nm FinFET HiSilicon Kirin 980 octa-Core Processor. 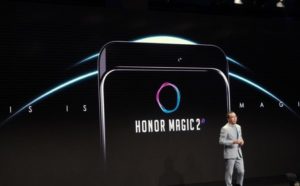 The Magic 2 Will be 6inch Bezel-less AMOLED Display with New In-Fingerprint Scanning Sensor Technology in the front of the display, While the Huawei already Showcase the In-Display Fingerprint in there Mate RS alongside with Huawei P20 devices. But the Date is not been Revealed now for India, But it will be launched in China on Friday, October 26th.

it was a First Chipset with a 75 percent improvement in a Single Core performance based on Cortex-A76.

The Magic 2 will be 19.5:9 aspect ratio Considering a 90 Percent Screen-to-body ratio which also has a 1440 x 2880 Pixel Resolution, and it could be expected that this will run over Android 9.0 oreo out of the Box With is Own Custom Skin of Eumui 9.0 resulting in a better User Experience.

It also Featured a Pops-up Sliding Camera Mechanism Looking Similar to OPPO Find X, but it also reported to be a Manual Pop’s-UP camera mechanism also this Smartphone will have a 40W Wired Fast charge, Called Magic Charger. There will be a 15 Layer protection probably the much faster than Existing Fast Charger also there will be a 15W Qi Wireless Fast Charging Support to power a 33000mAh battery These Will be much Fater them Existing Charger.

The New Kirin Kirin 980 octa-Core Processor Will much Powerful to compete with the Apple A12 Bionic & Upcoming Qualcomm 800 Series. it will also have a Dual NPU, Mali G76 GPU for inbuild Artifical Intelligence Computing & Graphics.

Looking toward its Specification. it is expected to cost Around 39,990 The Honor Magic 2 Will be a Premium-grade Device.